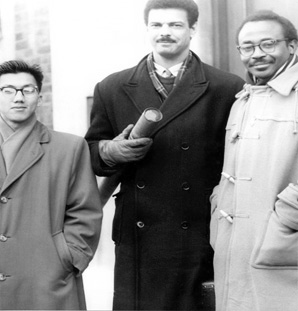 The early 1950s in Guyana (then British Guiana) was a whirlwind of political activity which energized sections of Guyanese society to challenge the colonial state. The political birth of the PAC (Political Affairs Committee) in 1946 – the precursor to the People’s Progressive Party (PPP) – and the political and social conditions had brought a major grouping of individuals to the fore. Among them were Cheddi Jagan, Forbes Burnham, Janet Jagan, Sydney King (Eusi Kwayana), Samuel “Bally” Lachmansingh, Ashton Chase, Martin Carter, Rory Westmaas, and Keith Carter.
The rise of the PPP culminated in the first elections under adult suffrage in 1953 which resulted in the transformational but perilous moment when the PPP won 18 out of 24 seats.

The government was short-lived. In October 1953 the constitution was suspended and the government dismissed. The PPP attempted to hold meetings in defiance of the Emergency Order of October 26, 1953. Five leaders and members of the PPP were detained: Martin Carter, Richard Westmaas, Ajodha Singh and Bally Lachmansingh. Under the terms of the provisions of the detention order, the detainees could appeal. There were two known appeals, one from Eusi Kwayana and the other from Rory Westmaas.
Rory Westmaas, who passed away on January 24, 2016 was arrested at least four times in the period. Sometime after the 1955 split in the PPP he unofficially retired from formal politics, fed up with the racially fragmented national movement. Indeed he was more than the measure of his political high point in the 1950s. A family gathering in honour of their father, and grandfather lists Westmaas’ other occupations as “woodworker, potter, magician, soldier, artist, architect, saxophonist, civil servant, university professor, debater, griot and ‘legendary crepe maker.’” To pay tribute to his contributions for a free Guyana, our column today carries an abbreviated copy of his statement against the detention order of 1953.
Statement by Rory Westmaas to the Governor’s Advisory Committee for Detained Persons, 1953.
Sir,
I have read your letter of the 28th November, 1953 together with a statement of the grounds on which my detention was ordered by the Governor.
I have read the grounds of the detention and feel obliged to make the following remarks concerning the allegations and statements contained in that document which purports to provide sufficient and justifiable reasons for keeping me detained but which are in reality nothing less than lies and half-truths and attempts at witch-baiting. They obviously have their roots in the vain attempts of two decadent imperialist hierarchies to help in the securing of the maximum capitalist profit through the exploitation, ruin and impoverishment of the majority of the population of the given country through the enslavement and systematic robbery of the people of other countries, especially backward countries, and last through wars and militarisation of the national economy, which are utilised for the obtaining of maximum profits (Stalin – Economic Problems of Socialism in the U.S.S.R.) Moreover, from these falsehoods and puerile methods of attempting to create anti-Communist hysteria it would appear that a “foreign ideology” – the fascist sponsored McCarthyism is being imported into the country under open licence symbolising yet another victory for aggressive American imperialism in a British-governed territory.
I will deal with the paragraphs and subsections in the order set out in the Grounds of Detention.
Para. 1. This allegation is false. Neither I nor any of my comrades held or took part in the holding of an illegal meeting at Blairmont Estate on that day. But the mere fact that a false allegation is all that can be levelled against me, under 1 indicates the tone and relative truthfulness of the document and the justification or lack of it for my arrest and continued detention.

It is true that I have been in London in 1952 a member of the Communist Party of Great Britain but to be a member of that Party which is a mass organisation does not necessarily mean being a Communist. From the information in this subsection it is clear that a spy or spies had been sent into the otherwise unsullied ranks of that organised vanguard of the British working class which is fighting for peace and socialism in Britain and which will lead the British People through freedom from American domination, the destruction of the imperialist and capitalist system in Britain to Socialism and Communism.
It is well known that the Communist Party of Great Britain enjoys legality but its existence legal or illegal gives it no power or control over the political life of the People of any other territory. While a member of that organisation I strove to learn and apply the method and philosophy of dialectical and historical materialism, the guide to action which is the tool with which the world can and will be interpreted and changed into the best possible place for human beings.
… It would be more truthful to state that I attempted to go to the Third World Festival of Youth and Students for Peace and Friendship which was held in Berlin, German Democratic Republic in August 1951. The word “attempted” is used advisedly – at Saalfelden near Innsbruck in Austria while en route for Berlin the party of young English workers and students with which I was travelling was brutally beaten up by armed thugs in the uniform of the United States of America. These hoodlums were attempting to prevent us from knowing the truth about a people whose country was freed from the cankerous stench of Fascism and the wonderful experience of being among tens of thousands of young people from all countries of the world united in the demand for Peace, Friendship and their future happiness.
… Please note that I was in Britain in June 1952 and could not therefore be in British Guiana at that time.

I am honoured and proud to have been elected a Vice-Chairman of the People’s Progressive Party and the world knows that, the people of Guiana returned 18 out of 21 candidates put forward for the 24 seats in the elections held in April 1953 and that this demonstrated the people’s hatred for Imperialism and the love and respect which they gave to the only organisation fighting for a betterment of their conditions, for increased wages, for Peace and National Independence. To serve as an ordinary member and an officer of that Party is a great honour.
…. paragraph 2 states that I am an executive of the Peace Committee “which is known to be affiliated to the Communist controlled movement”. It is necessary to point out that I am the Secretary of the Peace Committee which because of its nature can have no Executive Committee. The Peace Committee is a voluntary association of citizens whose sole concern is that the people of our territory should become acquainted with and voice their opinions on the vital issue of Peace and War. Today, it is precisely this simple idea – Peace or War which is engaging the minds and efforts of the greatest living scientists and artists as well as the overwhelming majority of the peoples of the world. It is in the heroic peaceful labour of the hundreds of millions of Soviet and Chinese workers and peasants and of the workers and peasants of the People’s Democracies of Eastern Europe that World Peace will be strengthened. It is in the everyday strivings of the Peoples of Western Europe and Britain for freedom from the stifling grip of the American atom-maniacs, in the honest labour of countless million of black people in Africa and India and in the sweat of the black and white workers of Latin and North America itself that the hope of mankind will be realised and the Peace of the world maintained.
I did not know that the Guiana Peace Committee is affiliated to the World Council of Peace and I am certain that the World Council is also unaware of it but I do know and over 600 million people who signed the Appeal for the signing of a Five-power Peace Pact also know that the World Movement for Peace is dominated by the inflexible determination of the Peoples to safeguard Peace in the interests of all humanity.
On May Day 1953, in Georgetown, I led the Peace Committee in the demonstration carrying portraits not only of Lenin and Stalin but also of Karl Marx, the founder of scientific Socialism, Comrade Mao Tse Tung, leader of the, People’s Republic of New China and Comrade Sydney King, Assistant Secretary of the P.P.P. and subsequently a People’s Minister in the House of Assembly.
The slogans carried by supporters and members of the Peace Committee were “For Peace and Higher Wages” “Ban Illiteracy not Books” and “Limey Go Home”. The bomb has not yet been invented which will apply the McCarthy loyalty oath to persons before deciding whether he explode or not. Regarding illiteracy, lying Imperialist propaganda would have us believe that Communists succeed best among illiterates who cannot therefore be able to read about the spectre of Communism which is haunting the world. With regards to “Limey Go Home” it is perhaps ironic that the very people who first called the Imperialist troops of England Limeys should be now crawling all over England (As well as the British Dutch Belgian and French empires).
…The honourable word “comrade” and not “associate” would convey more accurately the idea of the relationship which exists between individuals working together for the emancipation of the working class and People.
Extremist views are held only by Fascists and war-mongers. I consider an insult the allegation that I have identified myself with extremist politics, samples of which can be heard almost daily from the mouths of monopolists, racists, neo-Malthusians and other ultra-reactionary circles of the Western Powers in particular the U.S.A.
My views are Communist views and because I believe them to be right I will continue to propagate them for as long as it is possible to do so.
In conclusion I must state the views previously expressed by my Party that the Advisory Committee has been set up as a smoke screen to deceive and to buffer public indignation at the detention of my comrades and myself and that the Rules of the Committee are a clear exposure of the farce and masquerade that the whole thing is.
Further, I see in the arrest and detention of the Chairman of the Peace Committee, Mr. Martin Carter, a member of the Secretariat of the Peace Committee, Mr. Sydney King and myself a vicious attack on the Peace movement in this territory designed to permit the easier spread of war-propaganda, the greater more rapid exploitation of the people and ultimately the militarisation of the people in order to use them as cannon fodder in a new world war now being hatched up in the Wall Street cesspits.